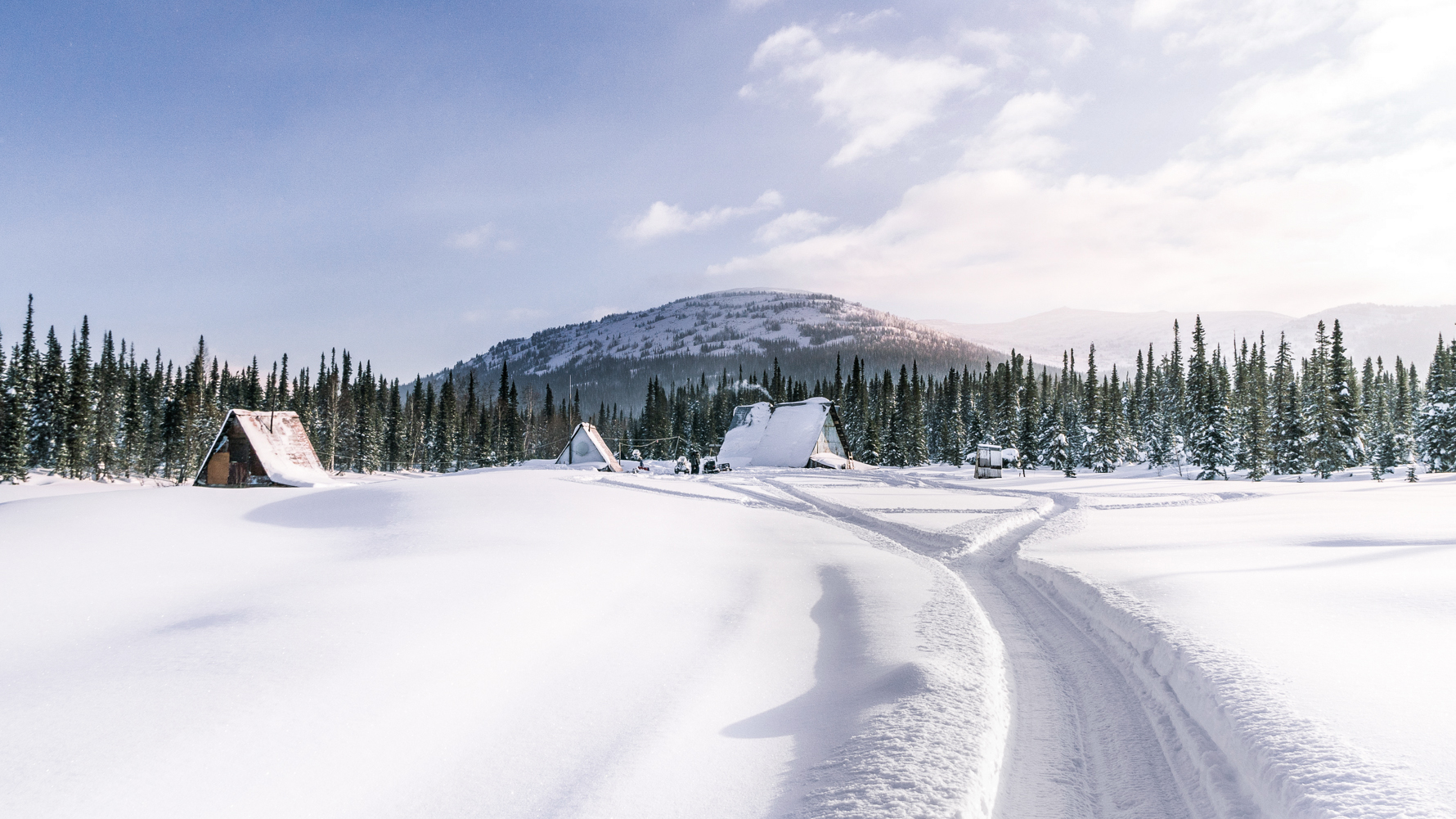 When planning travel itineraries, Natasha herself goes on reconnaissance expeditions into the wilderness. Her friend Kristina Kulakova came especially all the way from Vienna to accompany her on a difficult expedition into the Siberian taiga forest. Theyʼve been freezing, gotten stuck in snowdrifts and waited out the snowfalls in keepers’ cabins, but they donʼt regret a single thing. And they even brought some luxury to an otherwise rustic wooden cabin. Kristina shares all about how NFR Travel team plans your trip.

Does «get out of your comfort zone» sound familiar? What does that even mean? A hot bath? Feeling positive about the future? Or a tent for one? When Natasha called me up and asked me to join her on a winter expedition to the taiga forest in Siberia, I didnʼt hesitate. The questions «who with?», «why?» and «to do what?» came to me later. I knew from the outset this isnʼt the kind of thing I would ever do. I might travel to a jungle or even over to Iceland, sure! Even my folks’ friends have done Iceland, but none of my fashionable photographer friends have had a genuine off-grid winter adventure in the taiga forests of distant Siberia. Our adventure all began during the very first leg of the trip. In seriously strong winds, the pilot needed three attempts to land. And while we were held stacked in a holding pattern far above Moscow, I almost missed the only connecting flight to Novokuznetsk. My luggage wasnʼt as quick as I was and so it ended up missing the flight, so I spent a day temporarily relieved of my stuff. As the saying goes, thereʼs no such thing as bad weather, only bad clothes — this rings true in the deep cold, which isnʼt half as cold if you prepare well and bring the right clothes. In case of emergency (it happened when we were riding through the forest on a snowmobile at -30°C) there is always put-hairs-on-your-chest liqueur (yes, it helps) and emergency blankets (huge, gold, thermal, foil things) that I ended up wrapping my poor frozen feet in! 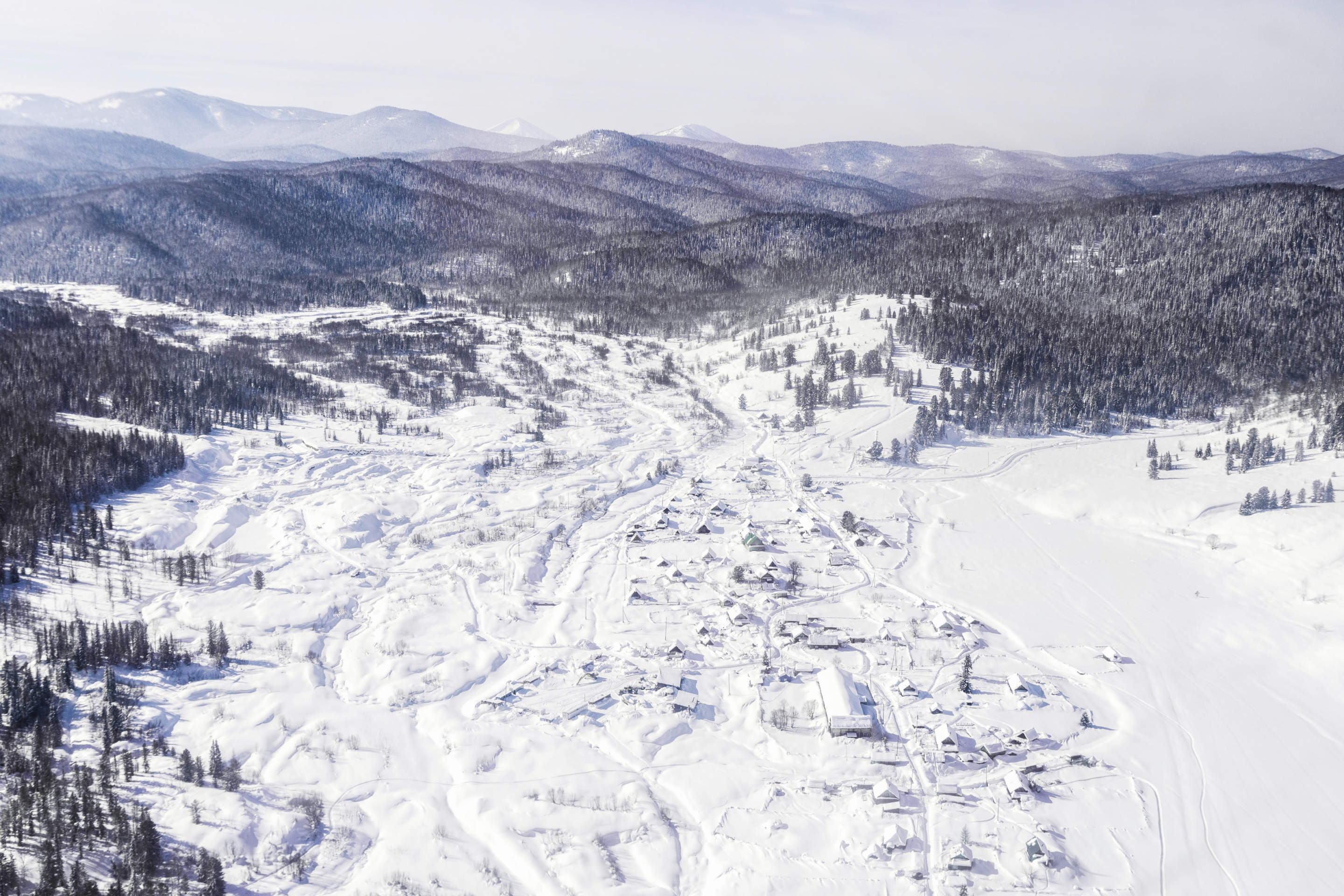 We were all told that there was no chance of leaving the forest and that we would have to live in Ust-Anzas until spring came. Every day started with heavy snowfall, but when it was time for us to head off, the skies suddenly cleared.

This part of Siberia is home to Shor people who number 13,000 give or take. In terms of religion, they are officially Russian Orthodox Christians, but they practice indigenous shamanism. Before we left for the taiga, Chyltys Tannagasheva, the first Shorian to have mastered the ethereal throat singing, held a rite for us to charm the forest spirits. To this day I still wear a red thread on my wrist as spirits fear this color. We were all told that there was no chance of leaving the forest and that we would have to live in Ust-Anzas until spring came. Every day started with heavy snowfall, but when it was time for us to head off, the skies suddenly cleared. Was this magic? On an important, serious note, there are a number of cultural activists among the Shor people. They build cultural centers to preserve their traditions and knowledge and pass them on to younger generations. 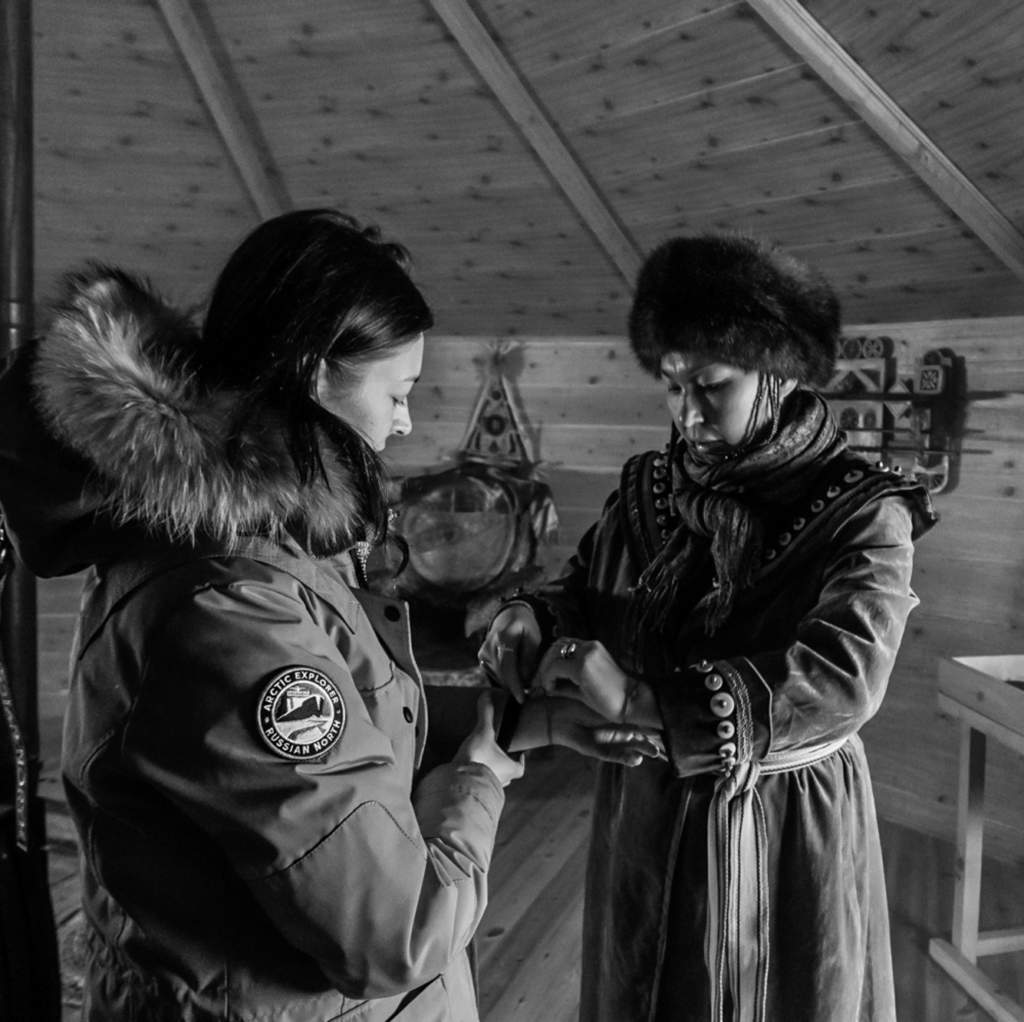 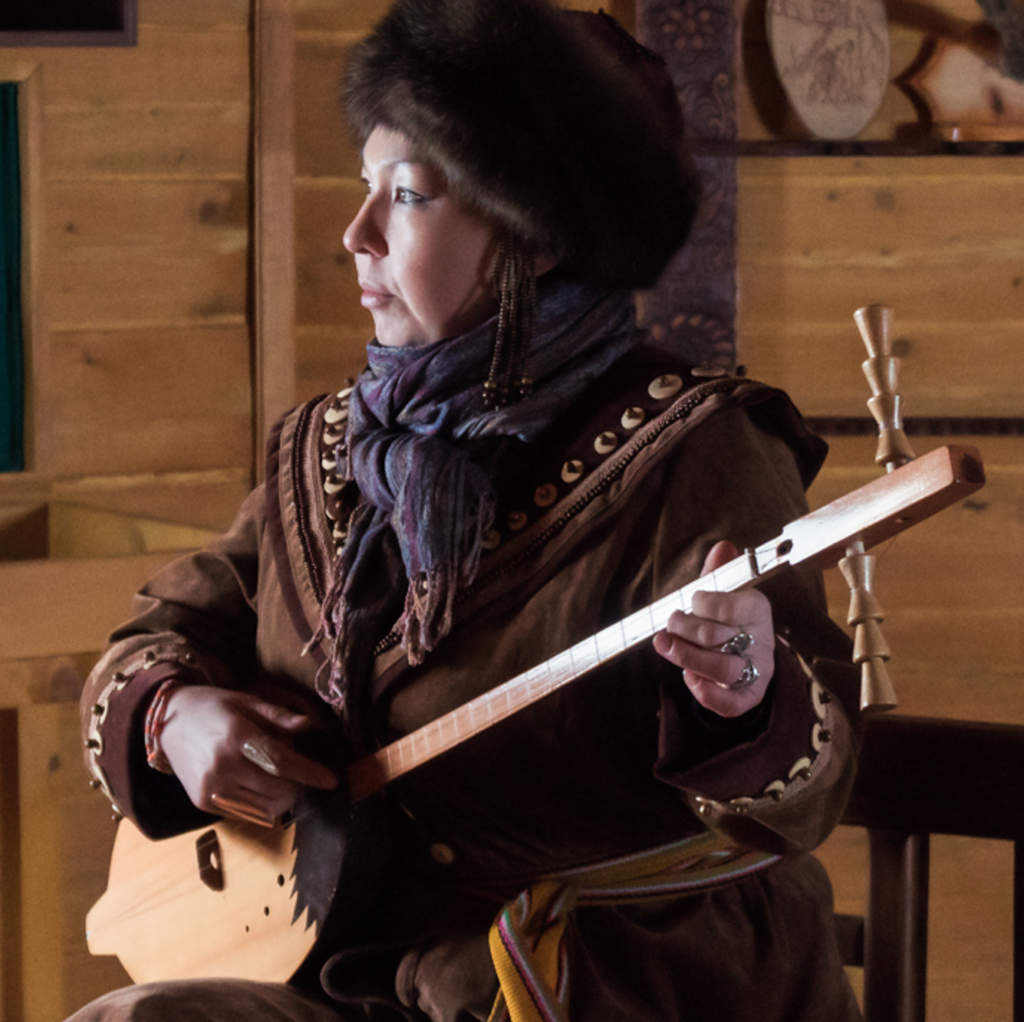 Travelling to the shelter at Taidzhesu was really tough. It was so remote that it took a four-hour train ride from a place called Myski then another four hours by snowmobile, ever deeper into the forest. When we eventually reached our destination, we had given up hope that the snow would stop, I could have wept. There was absolutely nothing anywhere near our little cabin. As we sat close to the stove at the house of a local man, Sergei Kozin, we looked at his beautiful photos on his computer. I asked myself what the hell am I doing here? It’s been such a trek to get here. It’s ridiculously cold outside it wasn’t even funny. There was nothing whatsoever worth shooting — photographically speaking! I can take photos of snow in Austria, in Moscow — anywhere! While we were asleep, exhausted and without mattresses, yet another meter of snow fell. We were going to get stuck in this remote place, just like everyone said we would. The shelter at Taidzhesu is 47 km from the nearest train station, and is only accessible on foot, skis, snowmobile or by helicopter. We were not optimistic to say the least, but to everyone’s surprise the sun reappeared, and so we decided to risk it and stay there another night. 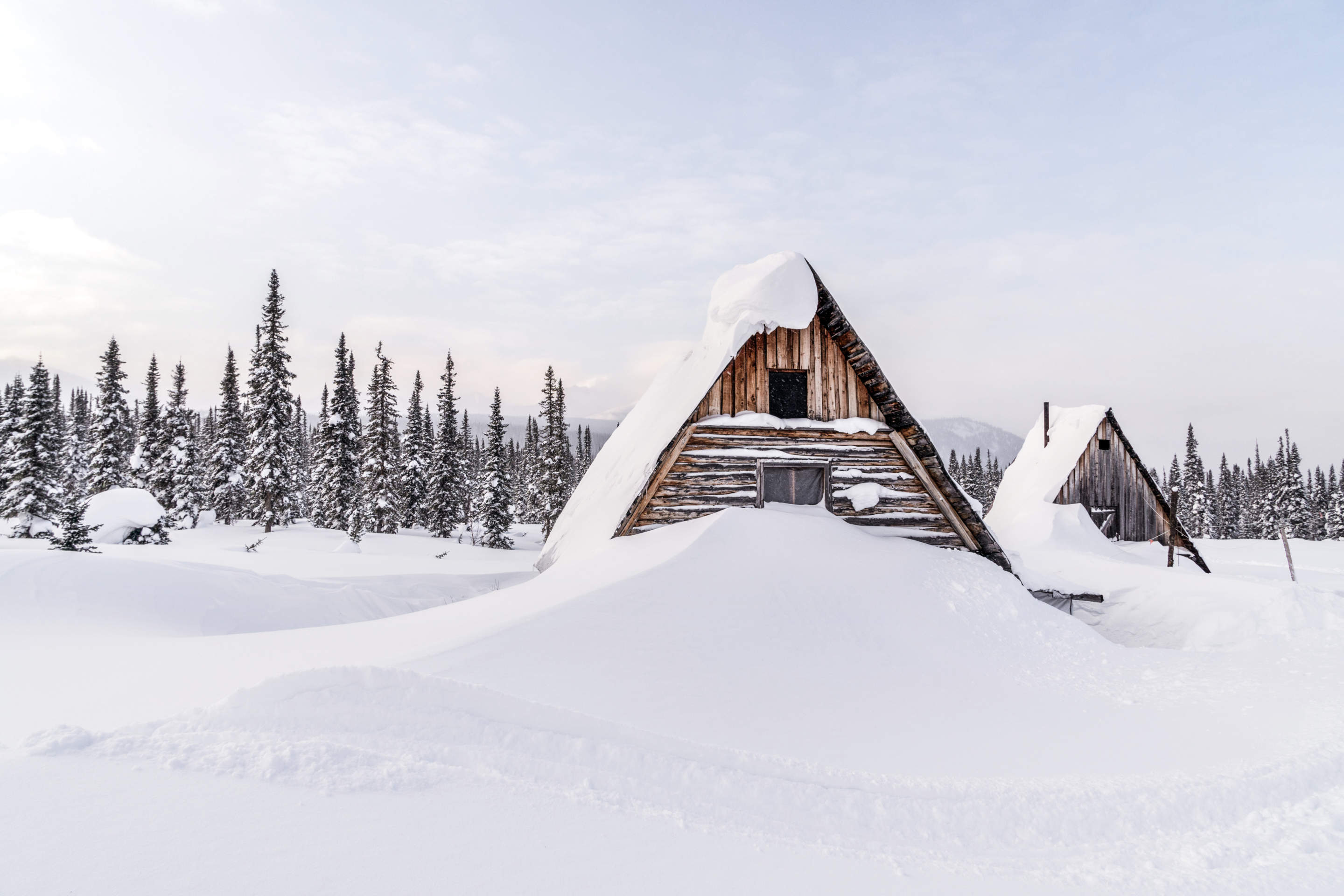 My first thoughts were that there was nothing special about the taiga. But skiing deeper into the forest, I suddenly understood. Firstly, I’d never seen so much snow or such a starry sky in my life. Secondly, there is no mobile network, no infrastructure and virtually no people. This really cleans your mind. Disconnected from the humdrum of daily life, you only care about not forgetting to dry out your shoes and socks. You spend the days talking about the eternal (what else is there to talk about in the taiga?) and spend nights sleeping. There was not a single day when I felt a lack of comfort. Maybe because in my childhood I went on road-trips and camping with my parents. Maybe comfort is a relative term, an illusion if you like. Sometime all we need is a change of scene from time to time. Heading back from Taidzhesu, I was already thinking about returning to the taiga. We had to walk through a pass as the gradient was too steep for a fully laden snowmobile to manage. With each step, I could feel the infinite in the forest and the power of the mountains. The extraordinary silence and the frankly insane beauty were only disturbed by us complaining about being tired… We left at dawn. The light on the pass was soft. The frost was already gone. 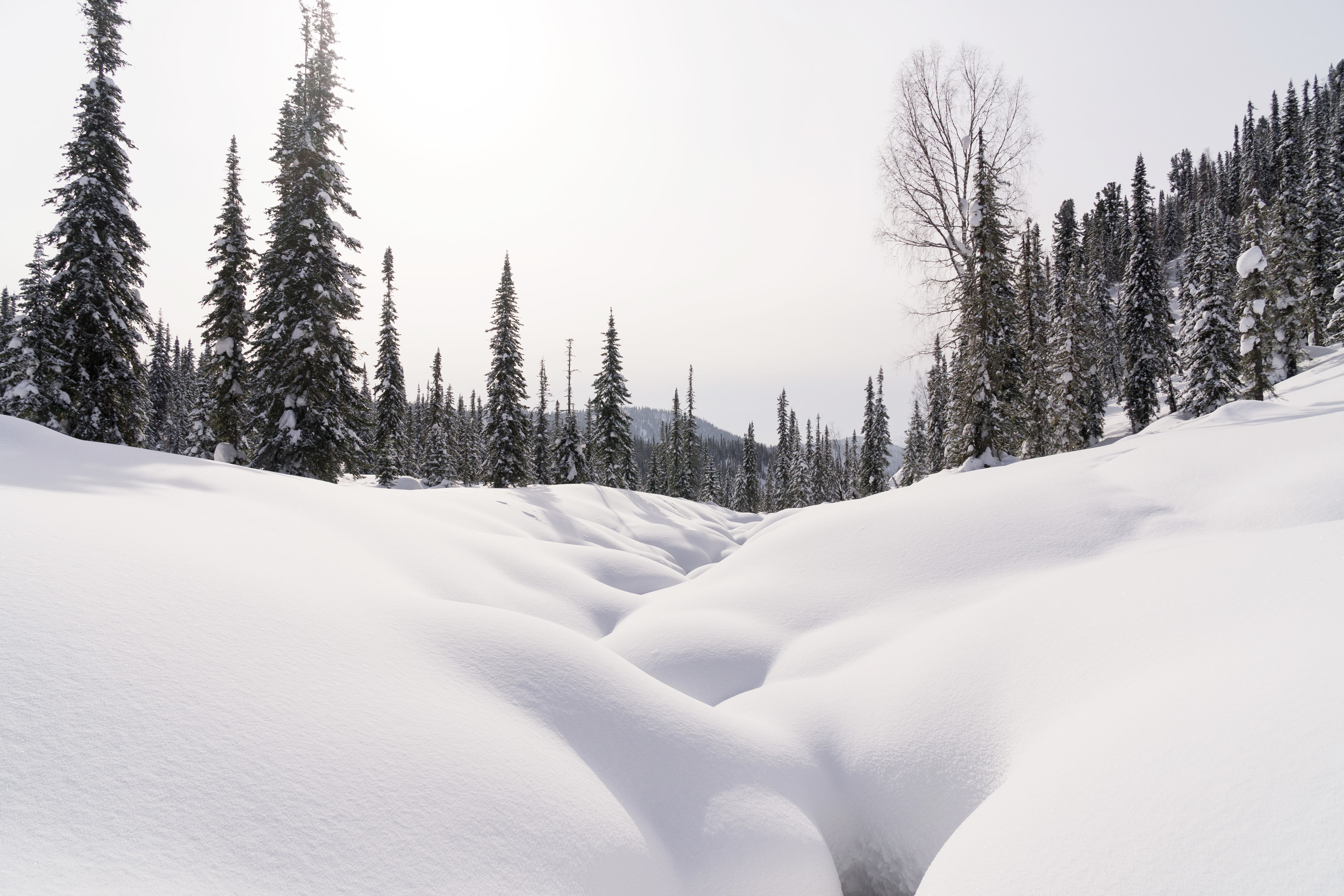 The last place on earth I would expect to meet such a warm, welcoming soul, would be in such an isolated house, up a mountain in the middle of the vast taiga — slap bang in the middle of nowhere.

Another place we visited out there was the modest home of Vasily, a ranger. Even in his retirement, he is probably fitter than any traveler. The last place on earth I would expect to meet such a warm, welcoming soul, would be in such an isolated house, up a mountain in the middle of the vast taiga — slap bang in the middle of nowhere. He cooked up a tasty pilaf (a rice dish) for us, gave us drink, presented us with twigs for the Russian sauna and told us some fascinating stories about his foreign guests. The next leg was a train ride to a place called Myski, and then, via a place named Tashtagol, we went to a hamlet called Ust-Anzas. In good weather, the helicopter flies to the village every Monday only. Luck was on our side: our departure was only postponed for a couple of hours. Lucky indeed, because it could have been days until the weather improved. The sun shone for a few brief hours, but this meant we could leave. Aboard the helicopter, there were plastic windows, and staples such as flour, cereals and sugar. The locals looked at us with kind interest: normally virtually no tourists make it here in wintertime. The vastness of  the forest is intense, especially for a two hour helicopter flight. Wherever you look — there are just trees and mountains. Eventually, we got dropped off in the the middle of the forest, in a hamlet with just 200 people.

In this place, life can’t have changed much over the last hundred years. Yes, there are satelites on the roofs and candles in the houses: but the electricity is only on for a few hours a day. In the evenings the only entertainment is the TV which is strictly scheduled. Local children are sent to study at the boarding school in Tashtagol. But there is no time to get bored: you have to milk the cows, clear the boats and roads of snow, fetch water and stoke the fires in the stove.

Cooking was our favorite way to pass the time as Natasha and I are self-declared foodies. We brought couscous, foie gras, parmesan and pasta with us to the taiga. Natasha managed to prepare Arrabbiata in a bucket as well as teriyaki with couscous on the open fire: there’s still a place for hedonism even in the taiga. 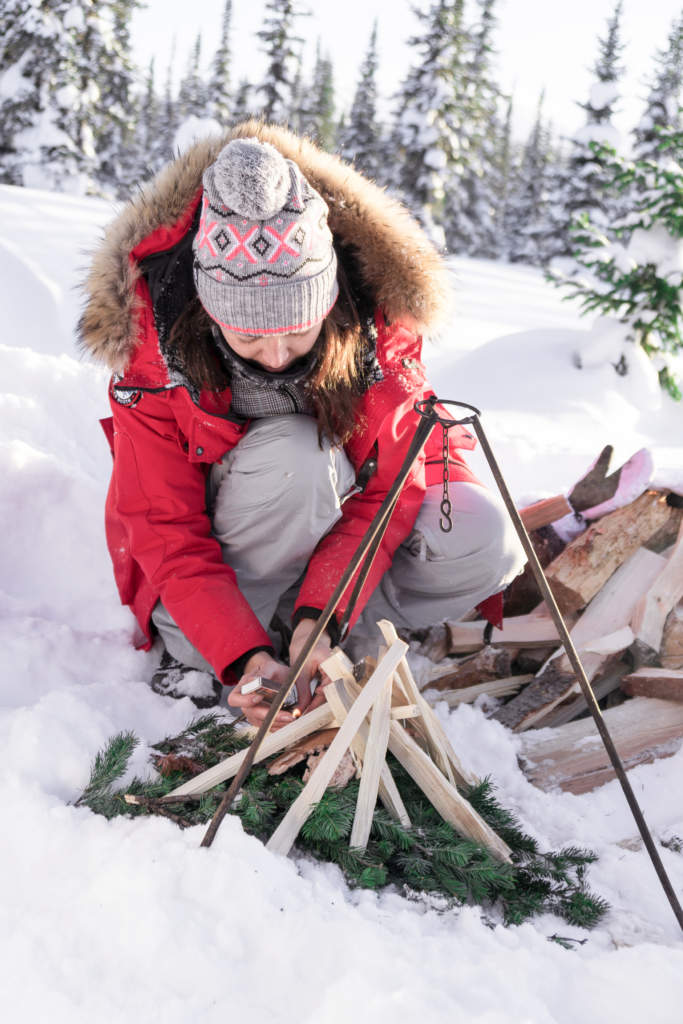 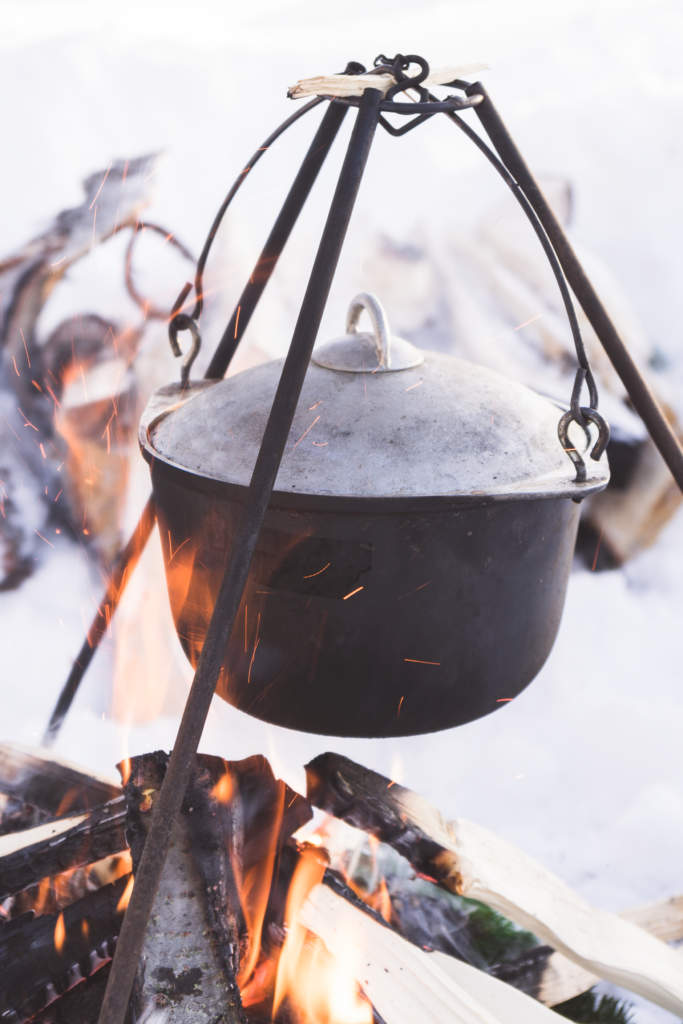 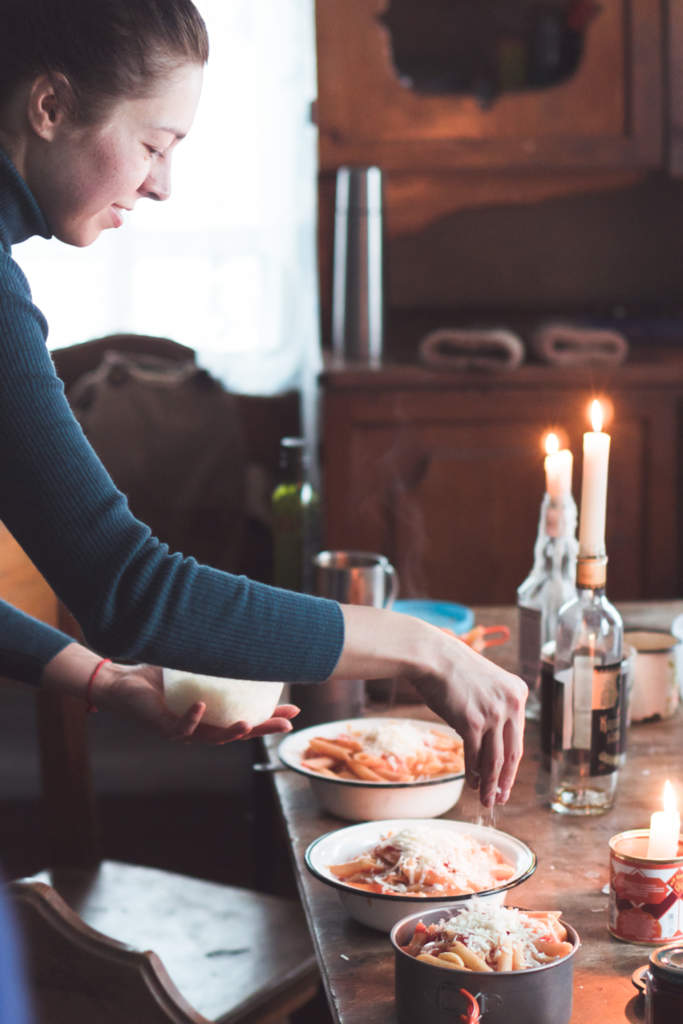 We met some amazing people there. A hunter and his family invited us to their place. I was impressed with their energy and desire to develop tourism in their little village. They looked so excited, talking about the Canadian filmmakers who were staying at their place! It was a breath of fresh air in a sleepy village. The next day, with heavy snow fall, no driver could reach the hamlet to pick us up. There was no cell phone coverage for 60 km in any direction. We were saved when we found a phone in one of the hospitable villager’s homes — we called the Ministry for Emergency Situations (they have snowmobiles…). At 9pm, we get on snowmobiles and rushed to a place called Sheregesh so we would catch our plane at 8 am the next morning out of Novokuznetsk. At night, in the forest, with no internet, in utter darkness, on a snowmobile — there were the countless stars overhead. I stared up at the sky — I caught myself thinking it was a little like a chill out video online. We made it quickly, and by that time I was ready to kiss the ground, but I held back and let out a little «hurray!

Coming home to Vienna, I felt like Iʼd been in a dream: as though the taiga, our adventures, the warming fires and the snowmobiles hadnʼt happened. But as my life slowly and inevitably returned to its usual humdrum rhythm, my thoughts were clear again. Remember the taiga. 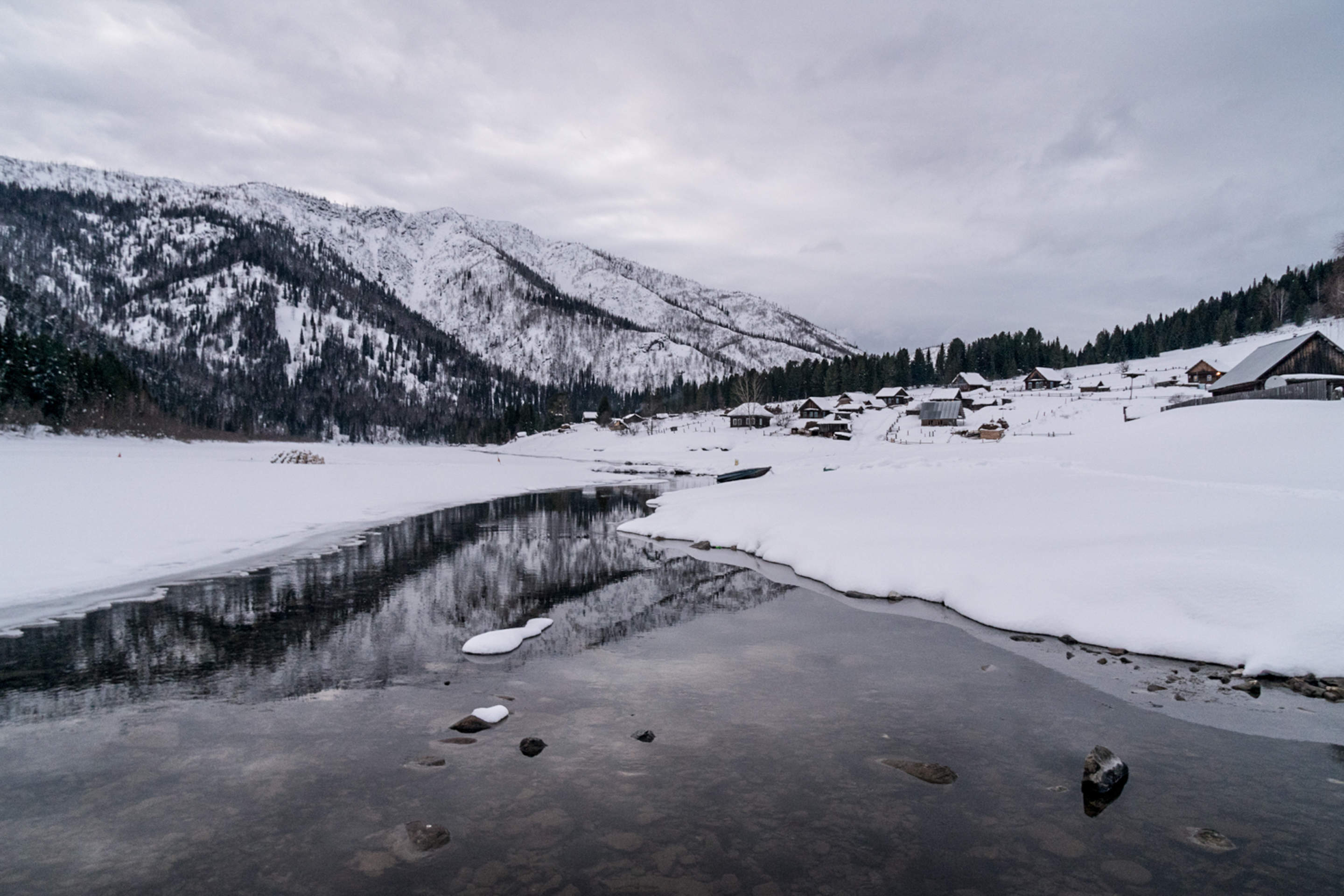