At the edge of Russia, on the Pacific Ocean, is the distinctive Kamchatka peninsula, famous for its rich natural diversity. This land is surrounded by rough ocean waters, in the interior lie fiery volcanoes and boiling, steaming geysers. Some 300 volcanoes, 29 of which are active, make up nearly 40% of the peninsula. But Kamchatka’s photogenic landscapes and natural diversity are not the only things to attract the travelers from far and wide: the area is also rich in opportunities for extreme sports! So, how are you going to make your adventures in Kamchatka unforgettable?

Explore the coast by kayak

The Kamchatka peninsula is washed by the Pacific Ocean and the Bering Sea to the northeast and by the Sea of Okhotsk to the west. One of the best ways to explore the rugged coastline is to take a long trip by kayak. On the water, you’ll find yourself face to face with wild nature: you can get acquainted with sea lions, seals, killer whales and other sea creatures, and see the most beautiful secluded bays, islands, headlands and lakes inland.

Surfing in Bali is no big deal these days: the hot sun, the warm ocean, coconuts, bananas… We’ve seen it all! How about surfing in the chilly waters of the Pacific in Kamchatka? One of Kamchatka’s best surf destinations is Khalaktyrsky beach. It boasts unusual jet-black volcanic sands and is a short 30-minute drive away from Petropavlovsk-Kamchatsky. You can catch waves here almost all year long: the hardiest of surfers are ready to jump in in sub-zero temperatures. Naturally, the best time to surf is summer when surf schools and equipment rental places are open for business. You don’t feel the cold in a wetsuit! 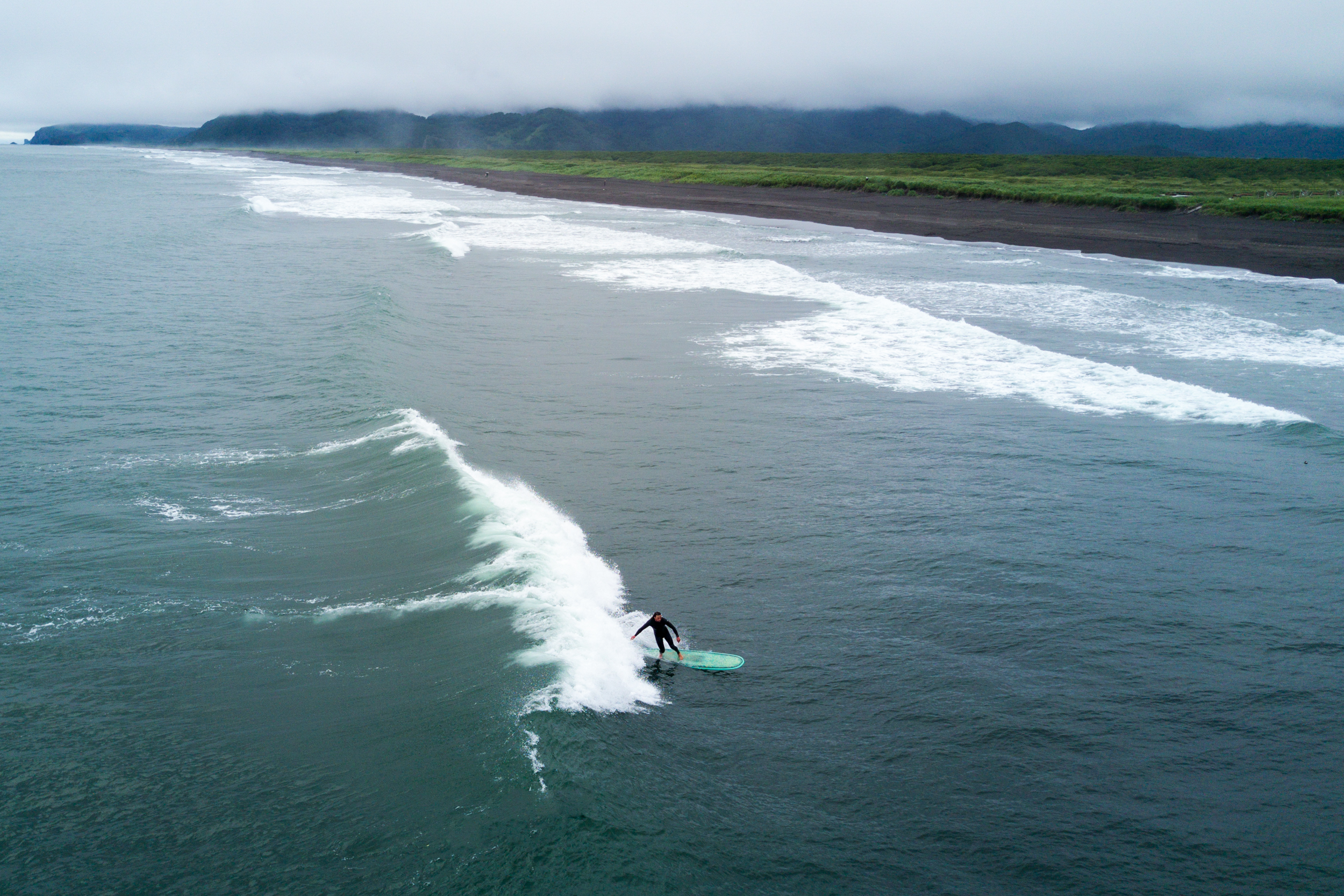 Lake Kuril is Eurasia’s home to the largest spawning ground of red salmon. The population of salmon is carefully regulated and can reach up to 6 million fish. The sheer number of spawning fish turns the lake water red during spawning season. With such vast numbers of fish, it’s no wonder that Lake Kuril attracts over 200 Kamchatka brown bears who visit the lake to fish. Across the whole peninsula, there are around 20,000 bears altogether — that’s one bear to every 15 human inhabitants.

Over the years, the animals on Lake Kuril have adapted to life alongside humans. Therefore, you can watch the bears and their prey close up as the bears are not shy of people and show no signs of aggression. Of course, it’s better to be introduced to the bears by an experienced guide who knows exactly where to observe them to make your encounter absolutely safe. Read the tips from an Israeli traveler who spent four days on the lake, watching the bears and taking their photos. 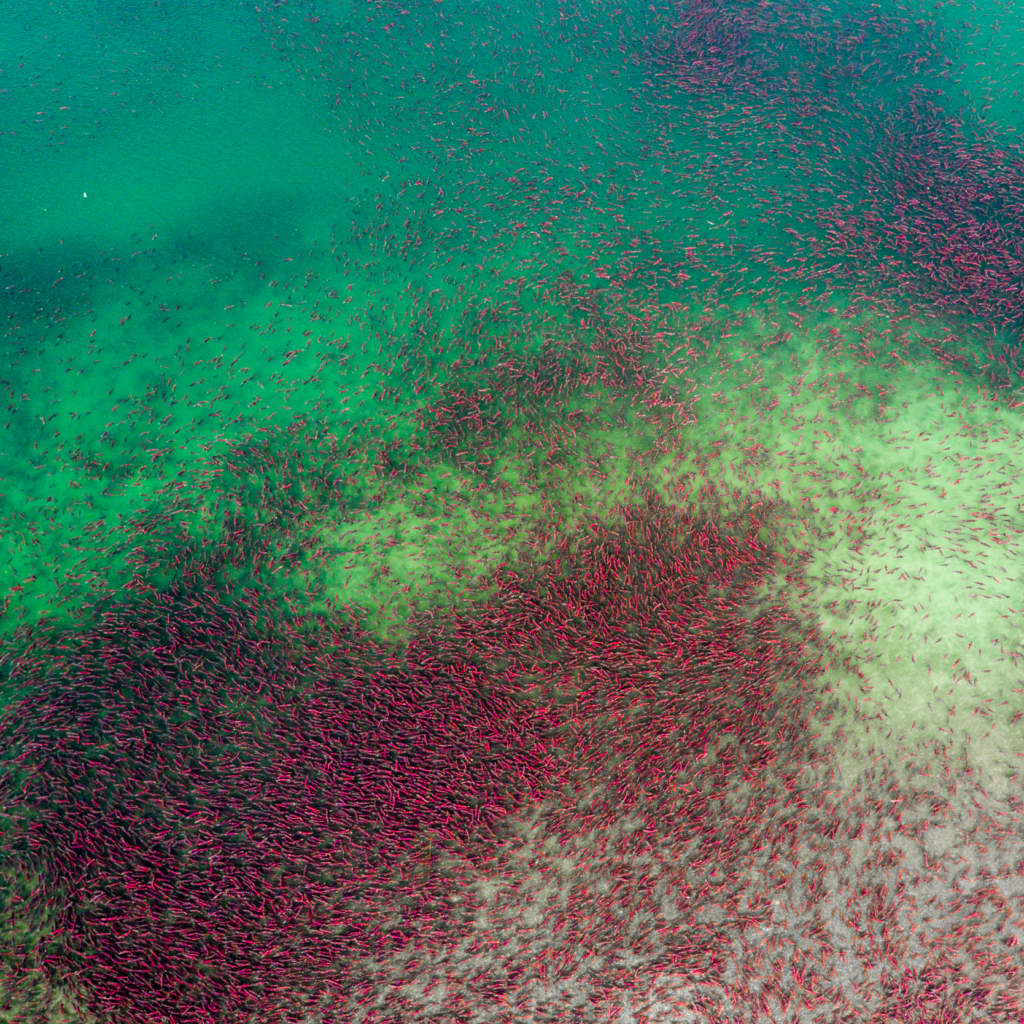 Kamchatka is rich in diverse wildlife, its marine life is especially fascinating. There are more than 300 species of fish to be found, as well as 7 species of carnivorous aquatic mammals. These include walruses and sea lions, plus five types of seal: northern fur, insular harbor, common, bearded and ringed. Alongside all of which live and hunt orcas also known as killer whales, mostly in Avacha Bay.

To get up close to the aquatic locals, take a tour on the water by boat or kayak. You’re going to be taking numerous pictures of the seals and sealions as they bask in the sun. You’ll be on the lookout for the uniquely marked fins of the killer whales. Try diving in the ocean waters or go snorkelling along the coastline. Keep your eyes peeled: you’re sure to see someone special! 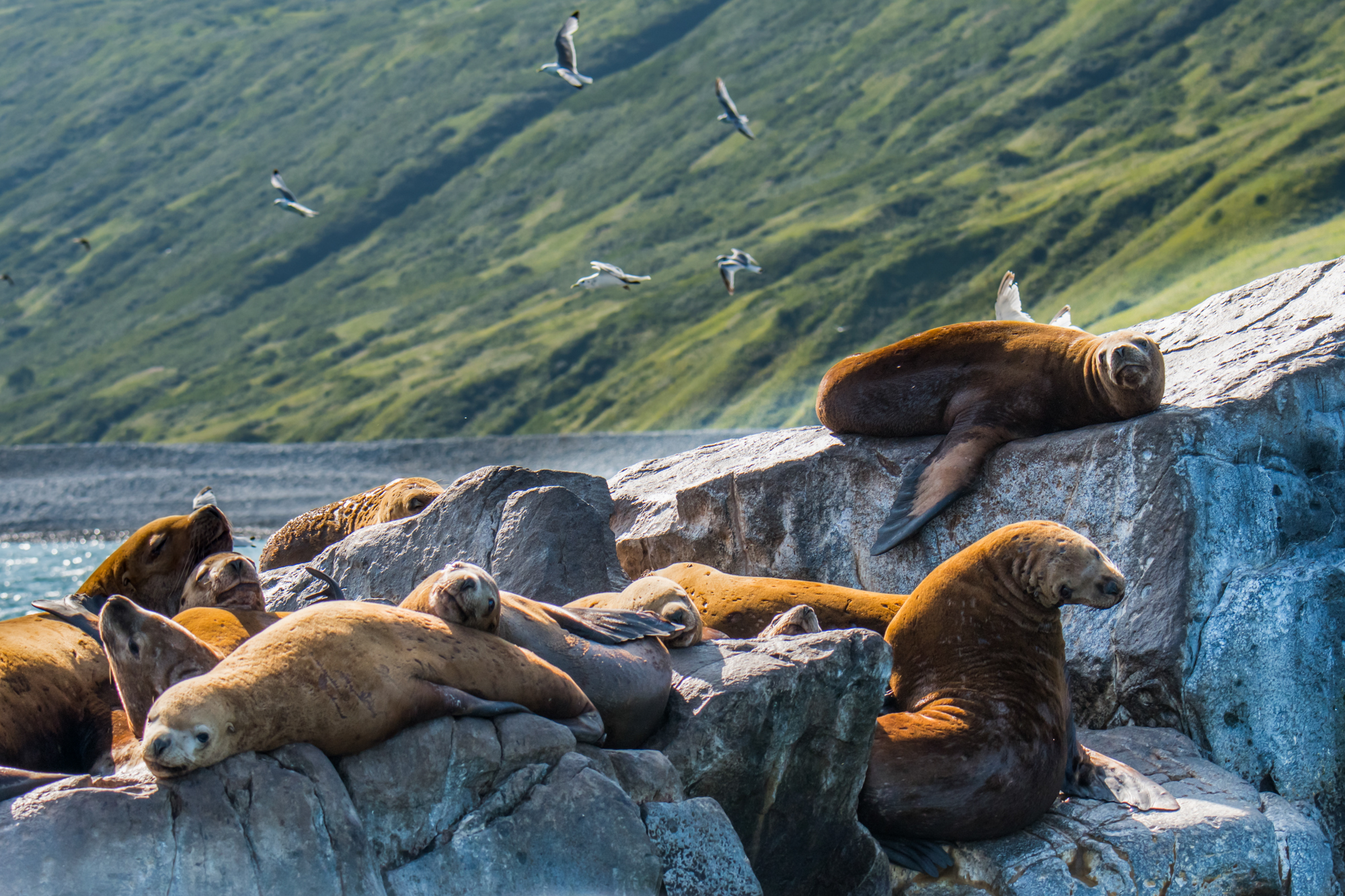 Fly to the Valley of Geysers by helicopter

Discovered as recently as 1941, the Valley of Geysers in the Kronotsky Reserve in Kamchatka is one of the world’s largest geyser fields and is the only one in Eurasia. In a cramped 8 square kilometer piece of land are over 40 powerful spouting geysers, not to mention hot springs, mud pools, thermal sites, waterfalls and lakes all in the Geysernaya River canyon, all surrounded by a dozen volcanoes. As dangerous as any of these places seem, there are specially designated paths for travelers. You can only reach the valley by air so take a helicopter tour from Elizovo airport, and face the raw power of Mother Nature. 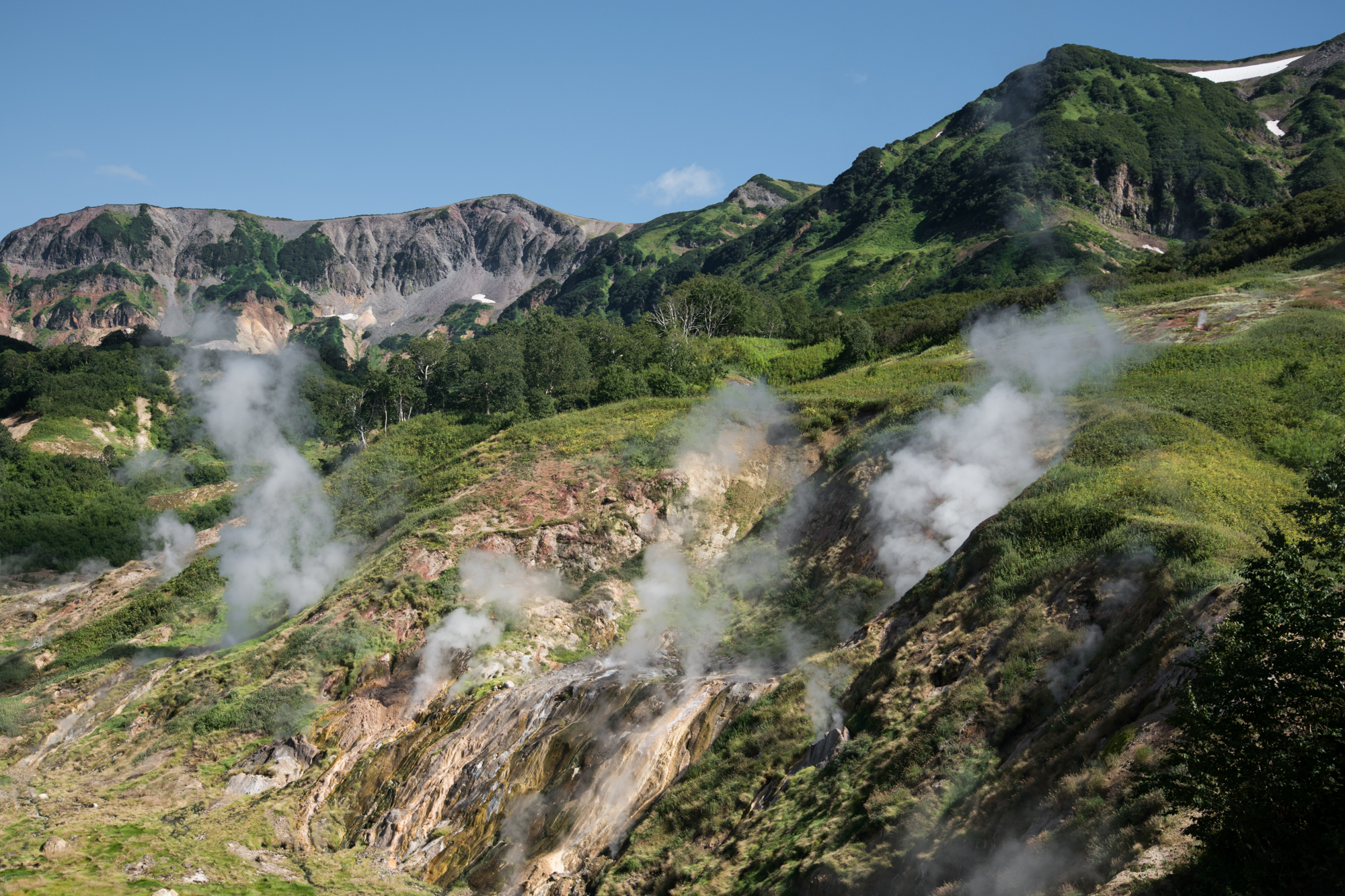 Gaze down into the crater of an active volcano

Klyuchevskaya Sopka is Eurasia’s highest active volcano standing at 4,750 m and situated on the Kamchatka peninsula. It’s tricky to climb and only trained mountaineers will make it. Luckily Kamchatka is rich in volcanoes and they all deserve your attention equally. This which are comparatively easy to ascend are: Avachinsky sitting within the crater of another volcano; the picturesque Mutnovsky with its black lakes, blue glaciers and red mud pools; and the flat-topped Tolbachik, covered in lava flows.NB: there are many volcanoes in Kamchatka an

d due to their diversity, they have been on the UNESCO World Heritage List since 1996. Hundreds of volcanoes are scattered all over the peninsula, so it’s not easy visit the majority of them. If you can, it’s worth paying for helicopter trips to travel from one volcano to another to enjoy the magnificent landscapes with a bird’s eye view. 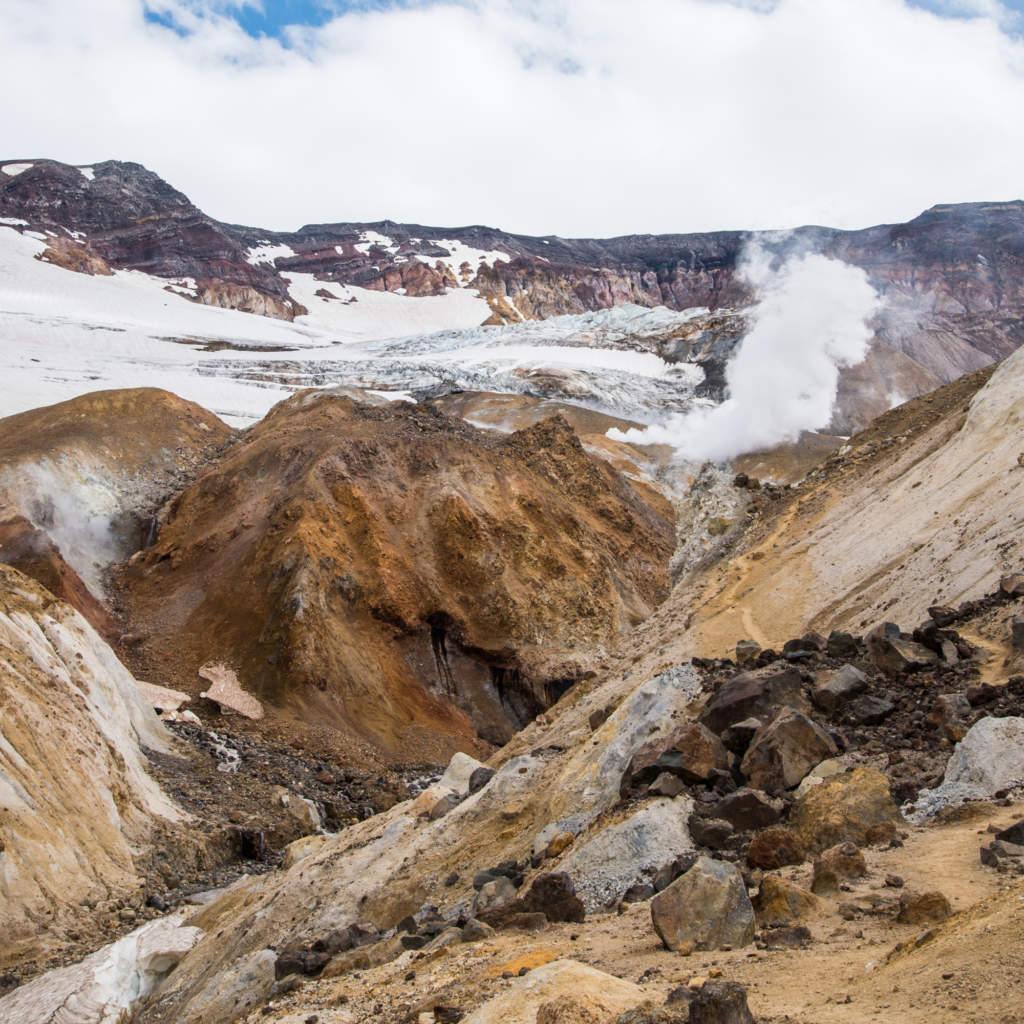 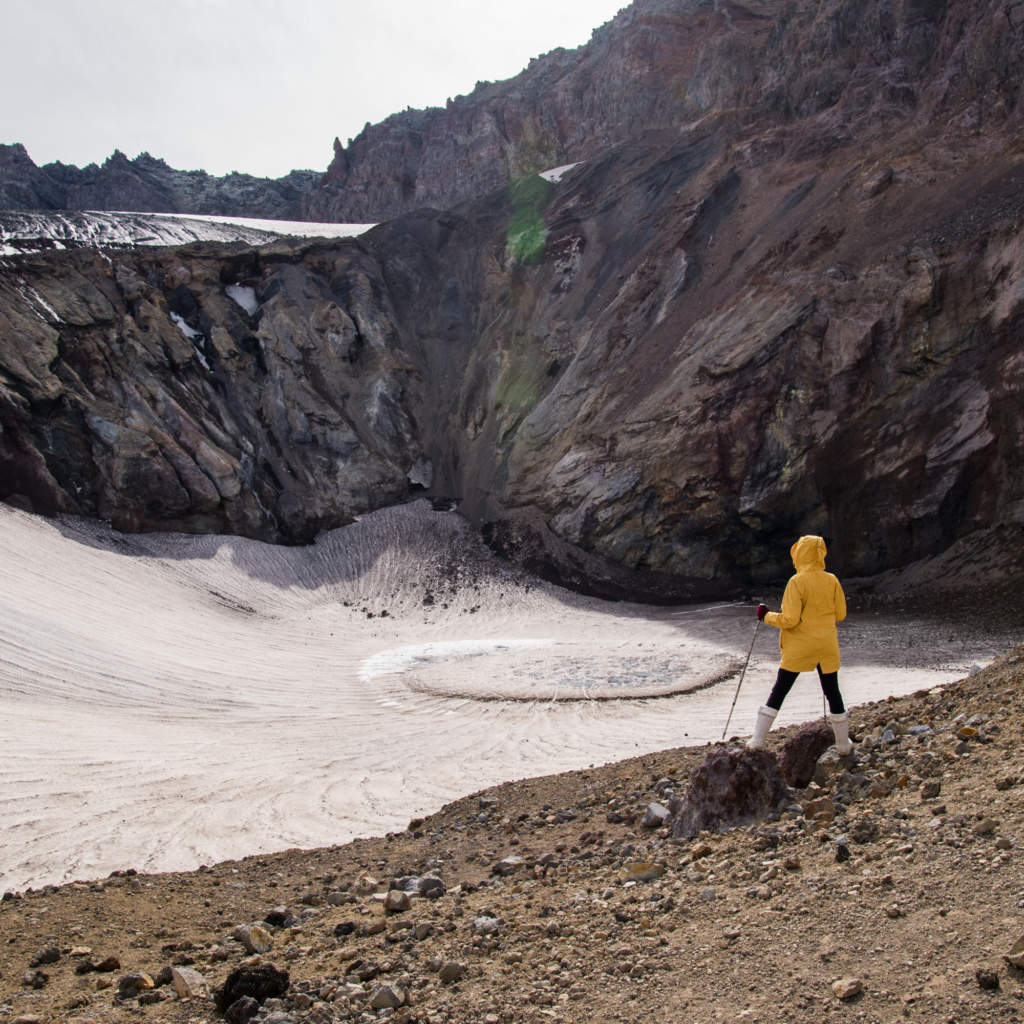 If you feel comfortable on the black runs at Alpine resorts and consider yourself experienced, Kamchatka will surprise you: imagine skiing down the pristine slopes of an active volcano with breathtaking views over the Pacific! This is no fantasy: we suggest experienced riders try heli-skiing! Fly to the highest volcanoes’ peaks by helicopter, then enjoy the buzz of skiing the untouched slopes with awesome views of the not so distant Pacific. Such strenuous activity requires skiers to be in great shape physically, the love of an adrenaline rush, and penchant for extreme thrills are also going to help. This is going to be truly unforgettable! 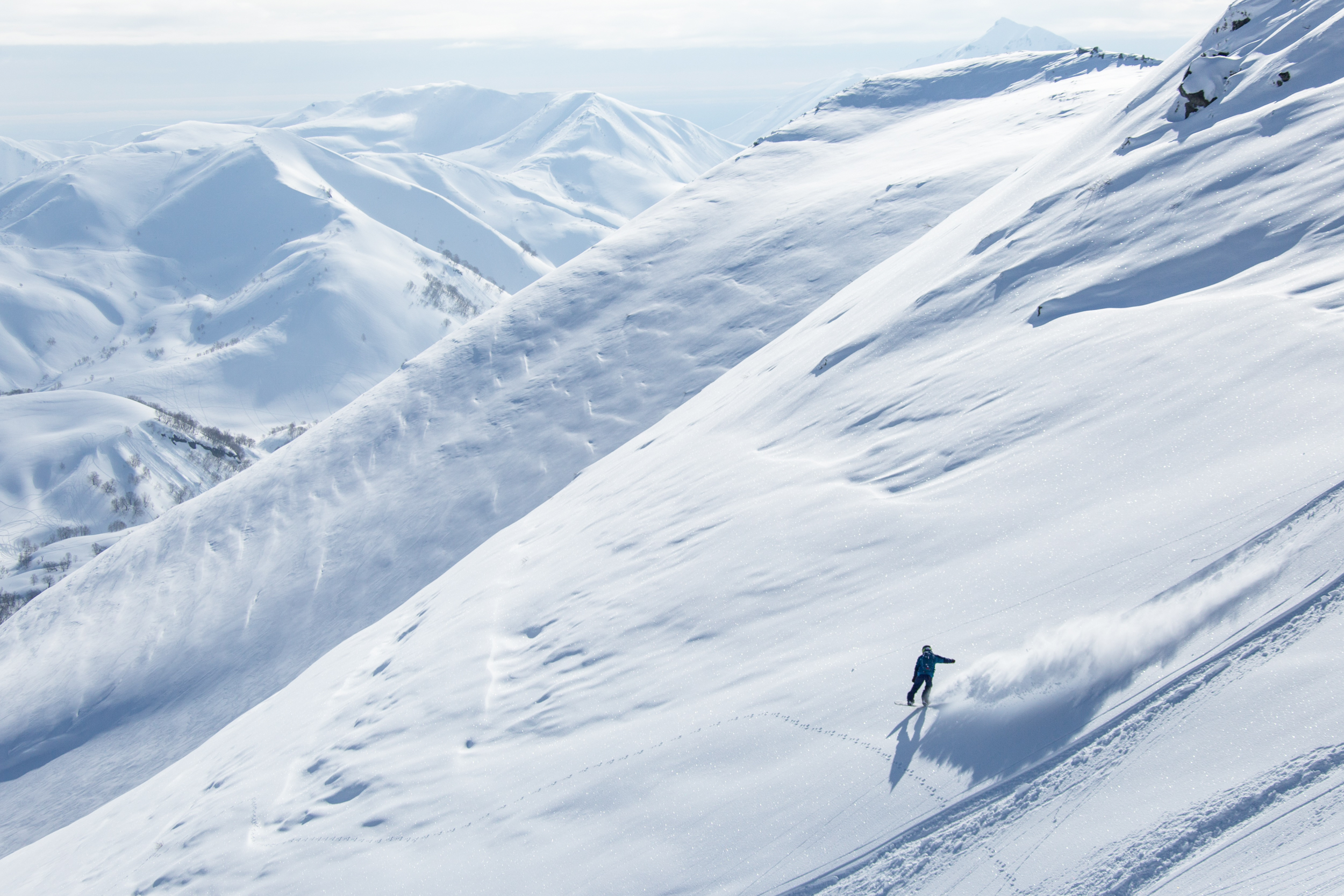